On the morning of March 31, 2021, New York Governor Andrew Cuomo signed the historic cannabis legalization bill passed overnight by the state legislature. This bill allows adults over 21 in New York to own and use marijuana and expand the sale of marijuana for medical purposes.

First of all, let's first understand the content of the New York Cannabis Legal Act:

Cuomo said that this move can create an industry chain of up to 4.2 billion U.S. dollars in revenue for New York. New York will set a 9% sales tax on cannabis, and lower-level counties and local governments can also levy an additional 4% tax through " "Legalization" means that all levels of finance can increase tax revenues by about US$350 million each year. Part of the new finance can be used to "feed back" minority communities.

In 2012, Washington State became the first state to legalize recreational marijuana. The possession, cultivation, and sale of marijuana in the state are all legal.

In 2015, Alaska, the northernmost state in the United States, also joined the team.

One year later, California, Massachusetts, and Maine also fell into the camp. In 17 and 18, Nevada and Vermont also announced the legalization of "recreational marijuana" in the state.

As of 2020, medical marijuana has been legalized in 37 states and regions across the United States, and in 16 states, including Washington, DC, recreational marijuana has also moved from the dark edge to the sun. 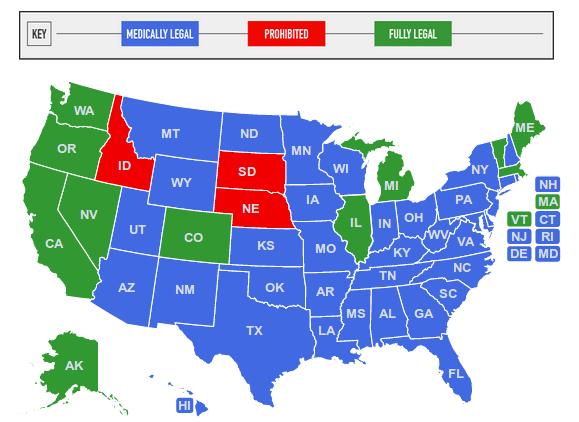